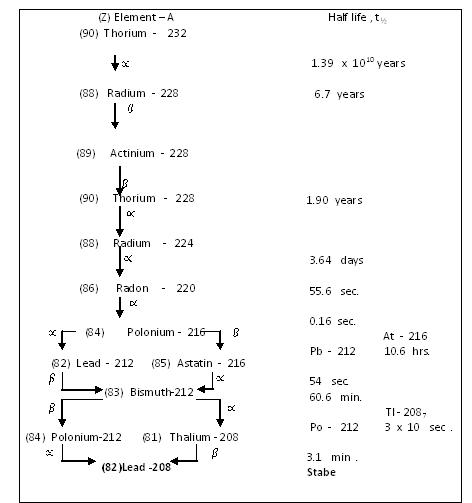 Parent nuclide of the thorium series is 232Th with half life 1.39 x 1010 years , i.e. after this period half of the parent nuclides disintegrate emitting ∝ – particles into the daughter element 228Ra . This is also radioactive and disintegrates emitting β – partricles to give the daughter element 228Ac . Disintegration order continues as shown in Table 11.1. 216Po in contrast to its predessessors , disintegrates in two different wasy . It mainly disintegrates (99.986 % ) to lead – 212 by the emission of ∝ – particle followed by the emission of ∝ – particle . The two daughter elements obtained by two different modes of disintegration of an isotiope are known as branched products . Thus , 212Pb and 216At nuclides are the branched products of 216Po . Isotope bismuth – 212 also two branched products , 212Po by β – decay and 208Tl by ∝ – de3cay , which produce the last member of the series , the stable nuclide 208Pb , bty the emission of ∝ – and β – particles respectively . Iyt is important to note here that the half life period of 212Bi is the same (60.6 minutes ) for either type of decays ∝ or β .