Effective Atomic Number (EAN) Rule-
Professor N.V. Sidgwick of Oxford University applied the electronic theory of valence proposed by Lewis in 1916 to Werner’s complexes. Lewis had proposed that a covalent bond is formed due to sharing of a pair of electrons between two atoms ,, each atom usually contributing one electron . Sidgwick observed that all the coordinating molecules or ions (i.e. ligands) have at least one pair of electrons on the atom which attaches to the metal ion. He suggested that this atom of the ligand, which is having the lone pair, supplies both electrons for bond formation. The resulting bond is also an electron pair or covalent bond, but because both the electrons are furnished by the ligand , the bond was given the name coordinate covalent bond. To distinguish this bond from the ordinary covalent bond, he represented it with an arrow.
The EAN rule states that a metal ion would form as many bonds so that the total number of electrons surrounding the metal in the complex, which is called effective atomic number, is equal to the number of electrons in the next noble gas. The EAN of 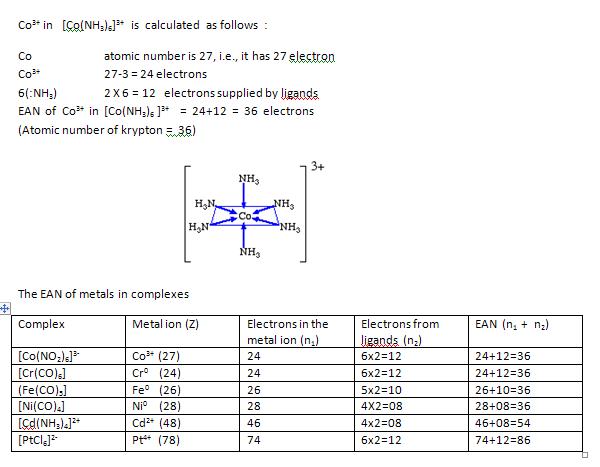 Example of the imaginary carbonyl molecule Mn(CO)5 . The EAN of Mn in this compounds would be :
Atomic number of Mn , Z = 25
no. of electrons donated by 5CO molecules , 2y = 10
EAN of Mn , (Z+2y) = 35
Clearly , Mn atom in Mn(CO)5 does not act in obedience to the EAN rule because its EAN is one short of krypton (Z=36) . Howe ever, this deficiency of one electron is fulfilled by the formation of Mn-Mn bond by paring of the spins of the odd electron present on both the Mn atoms . In the dimer Mn2(CO)10 so formed , the EAN rule is obeyed as shown below :
Electrons on each Mn atom = 25
Electrons from five CO molecules = 10
Additional electron from the Mn-Mn bond = 1
Total electrons on each Mn (EAN) = 36