Alternation of generation in Pteridophytes

Alternation of generation in Pteridophytes 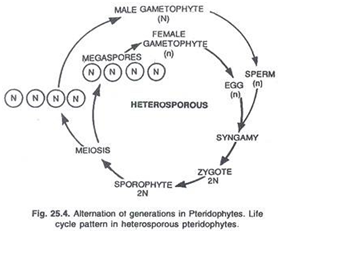 A pteridophyte is a vascular plant (with xylem and phloem) that reproduces via spores, and therefore was a member of the former and now invalid taxon Pteridophyta.Because pteridophytes produce neither flowers nor seeds, they are also referred to as “cryptogams”. The pteridophytes include the ferns, horsetails, and the lycophytes (clubmosses, spikemosses, and quillworts).
“Alternation of generation” term used by Hofmeister in 1851. He observed that in mosses and ferns there are two types of morphologically distinct individuals present in the life cycle. Both alternate in a life cycle back to back. Sporophyte generation is main and dominant in pteridophytes.Strasburger (1894) discovered the process meiosis, the actual phenomenon responsible for bringing about alternation of generation. The reduction in the number of chromosomes leads to the formation of a new individual in life cycle. This individual has haploid number of chromosome in its nuclei, bears sex organs and concerned with sexual reproduction.
The haploid gametes unite and established a diploid nucleus. After fertilization, a diploid cell or zygote is formed, which germinates to form embryo and finally embryo develops into sporophyte. This represented sporophyticgenetation. The sporophyte bears sporangia, which produce spores as a result of meiosis. These are haploid and also known as microspores. They germinate to give rise to the gametophyte, known as prothallus. And again sporophyte formation starts and this process continue one by one in life cycle.